Skip to content
Blood Water Mission
A fund raiser for drilling wells and setting up HIV/Aids clinics in several countries in Africa.   This was the brain child of a co-workers son, Josh and his friend Eva, called, “Tiny Bikes – Big Change”. Their goal was to raise $5000 for this project. I told you a bit about it in a previous post.  http://www.tinybikesbigchange.org/ The ride happened this past weekend. We started in Parker, AZ, on the border of California and rode four hundred miles to the border of New Mexico, just past Springerville. Not a big deal for a regular sized motorcycle, but these were suppose to be “Tiny Bikes”, 100 cc or less! In reality, of the seven who indicated they were coming, five showed up and of those five only three were official 100 cc sized motors or less. We suspected the average travel speed would be 30 MPH.  We were slightly optimistic…
﻿

Here we are at 7:00 AM, Friday morning, June 6th in the glorious Parker Wal-Mart shopping center. On hand we have two 70’s vintage Honda 90 trail machines, one Honda CB100, One Honda XL 250 and one BMW 650. I, Jim, rode the Beamer, loaned to me by my friend, Wade, who was riding the yellow Trail 90 on the far right. Our support team consisted of an RV driven by Joy and her able bodied assistant Judy and our parts researcher and “gopher” Brian, driving his trusty new Mazda.﻿
﻿ 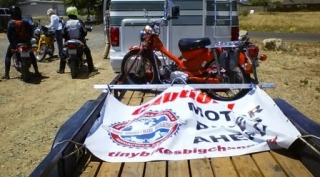 The laws of Murphy and Chaos collided about three miles down the road, when one of the Trail 90’s starting having engine issues. After several minutes of mind boggling analysis the group came to the best guess we could and declared it was the rectifier. Our dispatch Brian was sent to find a rectifier in Parker. There were none to be found there. Brian called around and found one about 50 miles south. He was off in a flash. The herd of able bodied rider/mechanics cobbled a temporary repair and we attempted to ride on. Over the next four hours we averaged a lightening fast 12 mph of riding, stopping, riding stopping, until we arrived at Congress, AZ. A delightful town consisting of a gas station and a Dollar Store. I’m sure there was more to it, but it was not my focus. Getting a cold drink and a finding a toilet was the higher priority.  About four hours and one speeding ticket later, Brian arrived with the part. After a potty break, lunch and a nap, the part was installed and we were ready to continue our journey. We were off again and about three miles down the road we came to a screeching halt, the same issue on the same bike appeared. (Go ahead and groan)  Our herd of rider/mechanics conspiring once again came to the conclusion to trailer the beast and get on with the ride. Once the broken bike was tied onto the trailer, the Beamer got two riders and we continued.﻿

We missed our 11:00 AM arrival in Prescott, AZ, arriving at the leisurely and distinguished hour of 5:00 PM instead. What’s the hurry, we are on small bikes! The owner of the publication, “Overland Journal” http://www.overlandjournal.com/ had heard the rumors of our fund raising ride across Arizona and had offered their back yard as a camping place for the first night. Then they offered to sponsor a dinner and small party on our behalf. What a bunch of encourager’s! They supplied a table loaded with pizza, salad, soft drinks and even ice cream along with the staff and employees of the Overland Journal and their neighbors, Adventure Trailers, http://adventuretrailers.com/ .
Truly a great bunch of people!

Saturday morning we continued the journey to Star Island Motor sports in Prescott Valley, http://www.starislandms.com/ for a vintage motorcycle show. We needed to display the classic vintage bikes some of us were riding and of course let them know about the fund raiser. The people were incredibly friendly and helpful. They gave us a place to work on the broken Trail 90, loaned us tools and gave advice. (Ultimately it was to no avail and it had to be trailered the rest of the ride.) The show attenders enjoyed looking at our vintage bikes and asking about our adventurous ride. It was a good morning but around noon it was time to hit the road. Another Murphy and Chaos collision, the RV wouldn’t start. Once again after several minutes of mind boggling analysis our rider/mechanics came to the best guess we could and declared it was the starter. We left one motorcycle and two mechanics with the RV to fix the problem and three bikes hit the road once again. The bikes were taking secondary roads and the RV would take primary roads and catch up quickly. Four hours later we finally reunited in the mountains at Strawberry, AZ. We made a lightening quick ride at 40 mph to the next campsite at Fool Hollow, near Show Low, AZ. Arriving after 9 pm. we set up camp, ate dinner, showered (hot ones even) and fell asleep watching the moon rise.

We left camp at the break of 9:00 AM, making our way to the New Mexico boarder just east of Springerville, AZ. Its always a happy-sad time to see the end of an adventure. Close bonds of friendship happen during adventures like these. We did the photo documentation thing, ate lunch and loaded up the bikes. It was a good fund raiser for a good cause. Initial results were:
Total People Reached: 24,000 on Facebook and Instagram feeds.
We had over 500 likes on Facebook and 1,600 Engaged (Facebook and Instagram).
We raised $3,000 that we know of. We do not have a final count from Blood Water Mission.
We do not have a count of new donors to Blood Water Mission.
We received $2,000+ In goods and services.
More contributions will be coming in over the next few weeks as well.﻿

Jim and Judy have been with Wycliffe since 1984. They have served in aviation maintenance/management, motorcycle, and 4X4 training, recruitment, and facilities maintenance in multiple locations in the US and Africa. They currently work with America's Area, North Region, Scripture Access services team. They are a mobile USA team using the internet and face to face encounters with churches, ministries, Native American communities, Diaspora communities, refugee aid organizations, and individuals, introducing them to www.scriptureearth.org. Through this website, those who did not grow up speaking English can access the Bible and other Scripture resources in the language they understand best. Would you consider becoming a part of their Wycliffe ministry partnership team? You can join their prayer or financial team by clicking on https://www.wycliffe.org/partner/JimandJudyMcCabe View all posts by jimjudywycliffejourney