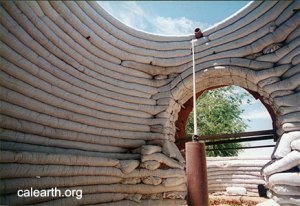 Superadobe (sandbag and barbed wire) technology is a large, long adobe. It is a simple adobe, an instant and flexible line generator. It uses the materials of war for peaceful ends, integrating traditional earth architecture with contemporary global safety requirements. Long or short sandbags are filled with on-site earth and arranged in layers or long coils (compression) with strands of barbed wire placed between them to act as both mortar and reinforcement (tension). Stabilizers such as cement, lime, or asphalt emulsion may be added. This patented and trademarked (U.S. patent #5,934,027, #3,195,445) technology is offered free to the needy of the world, and licensed for commercial use.

This concept was originally presented by architect Nader Khalili to NASA for building habitats on the moon and Mars, as “Velcro-adobe”. It comes from years of meditation, hands-on research and development, and searching for simple answers to build with earth. It comes from the concerned heart of someone who did not want to be bound to any one system of construction and looked for only one answer in human shelter, to simplify.

Cal-Earth believes that the whole family should be able to build together, men and women, from grandma to the youngest child. As such, we have spent many years researching hands-on how to make the process simpler and easier. There should be no heavy lifting or backaches, no expensive equipment, and a flexible and fast construction. The bags are filled in place on the wall using small pots like coffee cans, or even kitchen utensils. You can build alone or as a group.

The structural principles of the timeless forms of arches, domes, vaults, and apses are built with the materials of earth, sandbags and barbed wire using the engineering of single and double curvature compression shell structures, to reach the ultimate in strength, self-help, and aesthetics. In Superadobe, the ancient earth architecture of the Middle East using sun-dried mud bricks is fused with its portable nomadic culture of fabrics and tensile elements, not just through design and pattern, but through the structure itself. Structural design uses modern engineering concepts like base-isolation and post-tensioning. The innovation of barbed wire adds the tensile element to the traditional earthen structures, creating earthquake resistance despite the earth’s low shear strength. The aerodynamic forms resist hurricanes. The innovation of sandbags adds flood resistance, and easy construction, while the earth itself provides insulation and fire-proofing.

The Superadobe can be coiled into vaults and domes, the way a potter coils a pot, with barbed wire reinforcement, to build structures which pass California’s earthquake codes. These structures can last for one season before returning to earth, or they can be stabilized, waterproofed, and finished as permanent houses. The system can be used for structural arches, domes and vaults, or conventional rectilinear shapes. The same method can build silos, clinics, schools, landscaping elements, or infrastructure like dams, cisterns, roads, bridges, and for stabilizing shorelines and watercourses.

Materials research on the bags has shown that the majority of existing bags of both natural and synthetic material can be used. Natural woven jute bags have not been used by the architect because of toxic chemical preservatives like formaldehyde; instead, a synthetic, low UV (ultra-violet) resistant degradable material has been preferred. The bags or long tubes are used primarily as temporary flexible forms. In a temporary building, the bags are allowed to degrade and the building returns to earth. For permanent structures, the synthetic bags are plastered over to provide an erosion resisting layer, or they can be removed when the stabilized earthen filler is cured. The barbed wire is four-point, two strand, galvanized barbed wire and is recyclable. The earthen materials of clay and sand, with straw and water which have been used to make traditional sun-dried mud-bricks for millennia are not always available, nor do those most in need of a home have the time to make blocks, dry them and store them. By filling bags directly from the land and reinforcing with barbed wire, almost any earth can be used and the speed of building is much faster yet still in the hands of people.

Safety Standards and Comfort. Cal-Earth’s sandbag structures, reinforced with barbed wire, have successfully passed tests for California’s high seismic building codes, making them resistant to earthquakes as well as fire, flood, and hurricanes. Their design and thermal mass create comfortable living spaces based on the time-tested, sustainable architecture of harsh environments, such as that in the architect’s native Iran.
“Superadobe is an adobe that is stretched from history into the new century. It is like an umbilical cord connecting the traditional with the future adobe world.” –Nader Khalili
Superadobe technology (sandbag tubes and barbed wire) was designed and developed by architect Nader Khalili and Cal-Earth Institute, and engineered by P.J. Vittore. Superadobe is a patented system (U.S. patent #5,934,027) freely put at the service of humanity and the environment. Licensing is required for commercial use.

Jim and Judy have been with Wycliffe since 1984. They have served in aviation maintenance/management, motorcycle, and 4X4 training, recruitment, and facilities maintenance in multiple locations in the US and Africa. They currently work with America's Area, North Region, Scripture Access services team. They are a mobile USA team using the internet and face to face encounters with churches, ministries, Native American communities, Diaspora communities, refugee aid organizations, and individuals, introducing them to www.scriptureearth.org. Through this website, those who did not grow up speaking English can access the Bible and other Scripture resources in the language they understand best. Would you consider becoming a part of their Wycliffe ministry partnership team? You can join their prayer or financial team by clicking on https://www.wycliffe.org/partner/JimandJudyMcCabe View all posts by jimjudywycliffejourney